on June 29, 2019
College painting has assignments that we do.  At first, I was concerned about what seemed to be a lack of objective. But then I finally figured out, maybe I don't need to know what the objective is.

I've learned how to build canvas stretcher bars and stretch my own canvas, which my first assignment is being painted on. 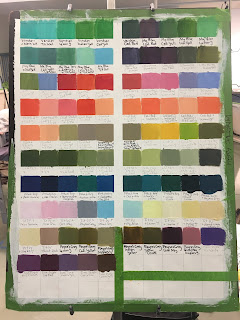 The second assignment is to mix 100 colors on paper that I gessoed.  I didn't know you could gesso paper and paint on it, so--cool!  I couldn't be less interested in this assignment, but I have learned a lot about certain pigments, namely how freaking strong they are, like viridian, and some of the reds.

To explain my subject I would need to tell you that my husband is a gardener. He loves it.  He loves color, and layers and this is his art.  He's been working on our back yard really hard this spring, and he's created a masterpiece.

Here's just a couple of pictures of the same view, which is my inspiration: 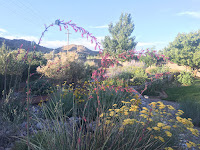 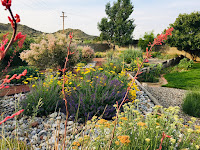 So this is what I decided was going to be my subject. 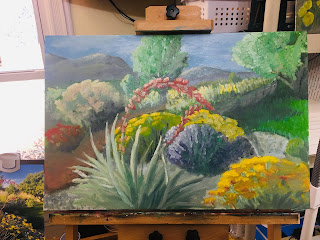 I think I want to kink the end of that arching coral bell yucca flower. It's too neat.  And I may draw the other one up past it, I think those trees need to be darker. Time for drying for now.

The next day, I started muting the green of the grass.  I cheated a little and added some lemon yellow, which is much colder than the Chrome yellow used in Monet's palette.  The greens in the desert southwest are much warmer and muted than they are in Normandy.  I needed to add some sky holes to the cottonwood (middle tree) to better define it.

I also did some more work on the shadows. - since it's first thing in the morning, there's going to be a lot of shadow, as the sun is very low in the sky.  I decided to bring some morning color to the sky. 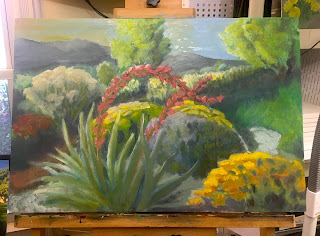 I also want to add some background "sky holes" in the yarrows to to separate the heads a bit.  I may add some more red to the shadows, and warm up some of the highlights.  Last but not least, I'll work on bringing out the purple salvia, which I"m going to make more like Russian Sage.

I don't know what's going on with that shiny stuff.  That might be from a medium I was experimenting with. 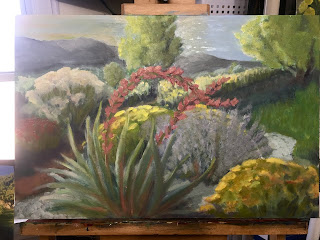 Day 4: I toned the sky back to blue, with gradiation from top to bottom.  I also I decided to use some pale rose to add some highlights to the sky and to add an inner glow to some of the plants and hills and path.  I also added to blue/violent for some of the shaddows. 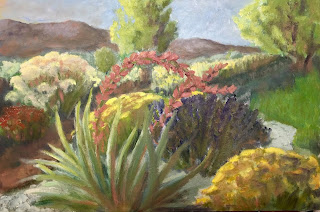 Tomorrow: I may bring back the tree shadow on the grass, highlight some of the path in the back, and see if I can fix the orange yarrow on the lower right, and get rid of that line underneath the hills in the background.  I should be able to finish this. 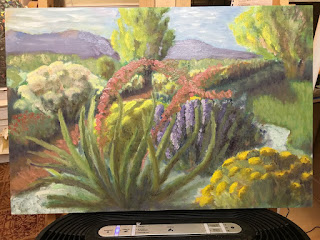 I'm thinking of a title. Monet had a habit of painting the same scene at various times of the day and throughout the seasons.

Maybe: "Impression, Sunrise over Brian's Garden, in Summer"
I don't think I"ll put this one up for sale.  I think we'll keep it so that we have something to look at in the winter.

Surprisingly, I discovered a that money did a series on the French Mediterranean that included a yucca: 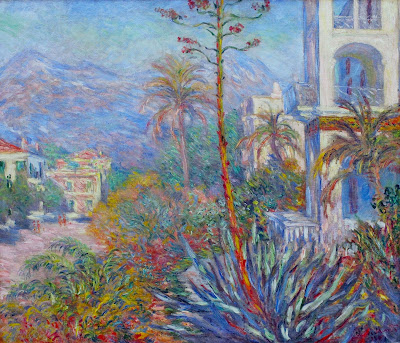 Which this as my guide, I can now make some more decisions.  I plan to make the mountains a little more indistinct but for the most part, I'm done. 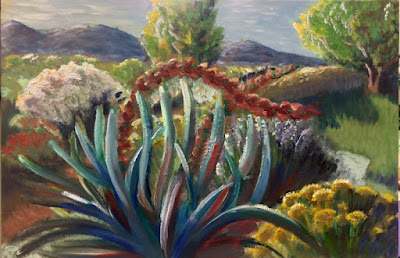 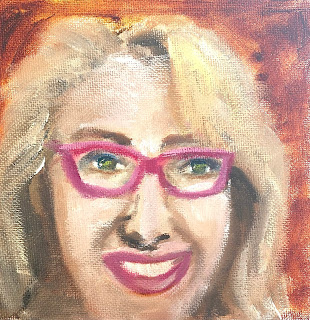