My husband is a gardener. He’s amazing. And, I keep thinking I should (there’s those “should” words) paint some of it, but there’s so much going on that it’s hard.

However, this weekend, I decided to give it a shot. I pulled a 16x20 canvas out of my closet, and pulled up a picture on my iPad. There’s one on a cloudy day, and one with the sun out. I like to have both on hand, because the bright, but cloudy day photos give you more of an idea of the local color, while the sunny ones tell you where to put the shadows. 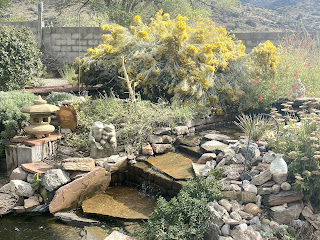 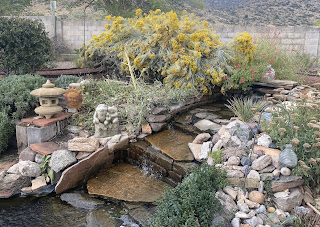 I started with wetting my canvas with water. This is a thing I’m doing now, and so far it’s working okay, I think. The beginning lay-in is kind of water colors, since I’ve made the switch to water-miscible oils. 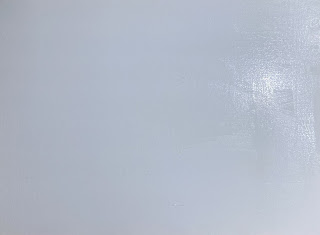 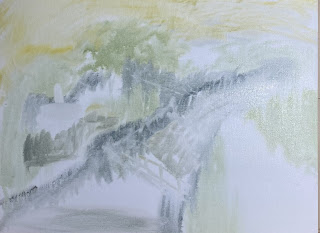 I started sketching the lantern in, and—auuuggghhh! That is wwayyy to big. 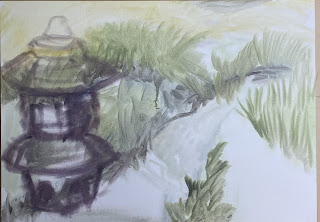 It’s water-y. So I took a paper towel and wiped it out. 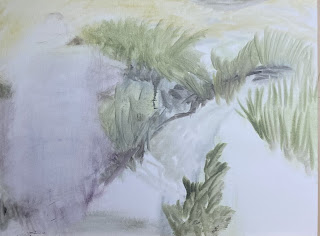 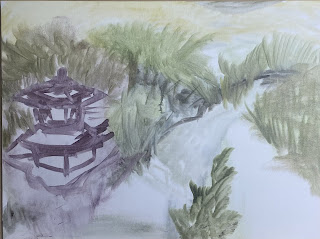 I started putting in some of the structure of the waterfall, and the shadows under the charisma. I use a mixture of alizarin and Virginian for those shadows. 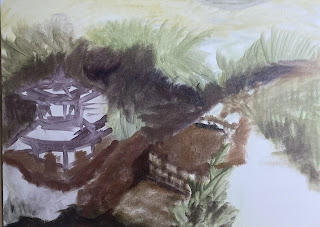 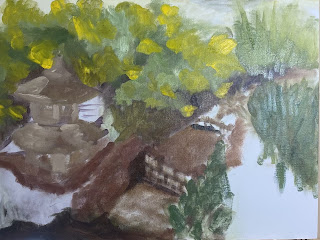 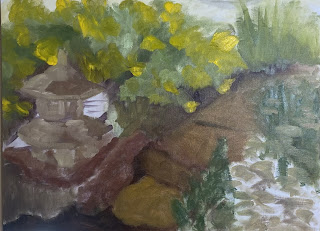 Originally I started with the shadows coming from the left, but then the sun came out, sooo.
Then I added in some more shadow back under the chamisa.
I also decided I hated that conical plant and decided to get rid of it, or minimize it. I think I’ll turn it into a sedum, but not under after I have more of the waterfall and rocky area in. 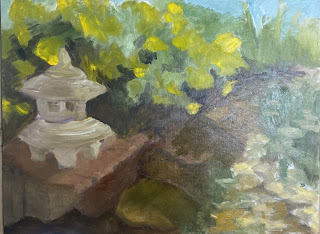 Now I need to let it dry before do any more work on it.

In November a couple weeks ago, I was going to go out with Himself, my Patrone, for a hike and a paint. Himself is the one that I married after my first master's degree, and a decade  after my mother warned me to get a job that pays .  However, it was too breezy.  Some plein air painters would say, "that's what happens with painting outside," but I'm still too new to the genre to pull it off. So, I opened up an old ipad that I've repurposed into a reference photo repository to find something worth painting, (this is a pretty genius way to access reference photos, because you can pinch in to see details and isolate color) and came up with this image from Crescent Moon State Park, near Sedona.  .   I frequently begin my initial blocking in, and many of the later stages, without my glasses on.   I do this when painting out of door, as well.  It helps me to focus on the big shapes, and to ignore that anxiety that arises when I'm missing out on details. Since m