In November a couple weeks ago, I was going to go out with Himself, my Patrone, for a hike and a paint. Himself is the one that I married after my first master's degree, and a decade after my mother warned me to get a job that pays.

However, it was too breezy.  Some plein air painters would say, "that's what happens with painting outside," but I'm still too new to the genre to pull it off.

So, I opened up an old ipad that I've repurposed into a reference photo repository to find something worth painting, (this is a pretty genius way to access reference photos, because you can pinch in to see details and isolate color)

and came up with this image from Crescent Moon State Park, near Sedona. 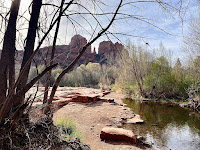 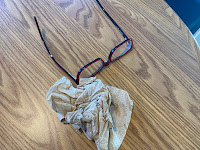 I frequently begin my initial blocking in, and many of the later stages, without my glasses on.   I do this when painting out of door, as well.

It helps me to focus on the big shapes, and to ignore that anxiety that arises when I'm missing out on details. Since my prescription is a -3.0, it works pretty well.
I pulled out a ridiculously dark red toned hardboard panel that was in my closet. It was toned with nearly pure pigment of red oxide I don't know what I was thinking.  If anything could pull it off it might be this picture. 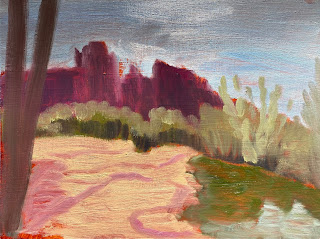 You can see the brilliant red behind what I put in when I started with the block-in.  I'll add to this post as I work on the picture.
Okay, well, I forgot. I did some more work on it during the week.
So, this is the part where I stop looking at the reference photo for the most part. 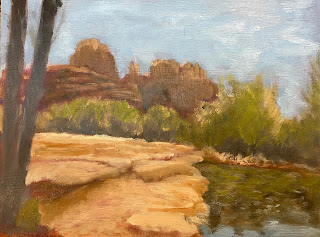 I have to say that I DO NOT like the titanium/zinc white that I bought. Although it's a Gamblin, which should be good enough, but I feel it gets gummy really fast and cuts down on the chroma.

Then again, this sky may be really dark because of all that red behind it.

Hmm.  I think the water needs more light to balance out that large expanse of sky. I'm going to add back in some sky into the water foreground. 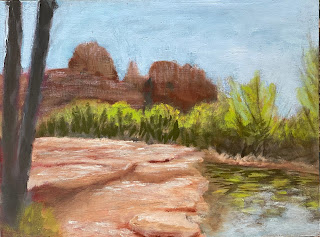 Here I've put in some more darks and started adding in some detail.  I hate the detail.  I think it looks like the water is full of algae.
I'll probably brush it back out.
Then add it back in.
Then brush it back out again.
Etc.
You know how some people are fussy about some minor detail on their face that NOBODY notices but they? That's me, and my paintings.
To be continued....(for this painting)
MEANWHILE.
I often like to have two paintings going at once, and this photo on the internet caught my eye.

It's extremely small, which is perfect. It's already nice and blurry for me. I love the composition, though. It's a photo of an area of the Rio Grande near Alameda, looking north.
Here's the initial blocking in: 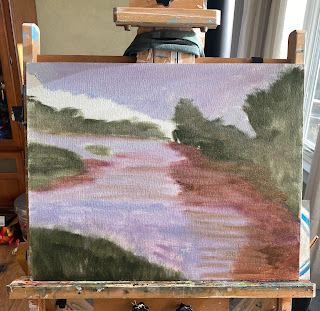 I feel like the sky is too violet. and the reflected flora is too red.
It's all just too much on the cool side of the spectrum. And of course, I need to start putting in some lights. 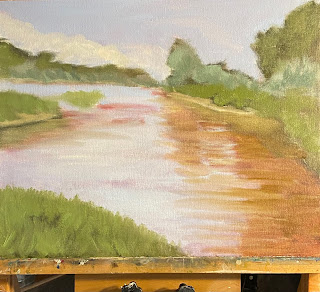 and so the second pass
And then the third, and forth...so here we are.  Nearly done, I think. 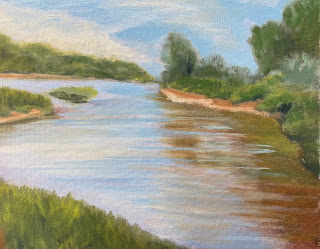 This is one of the bigger paintings I've done so far, 16x20.
A little more blue, adding back in some darker greens for shadows that I had painted out earlier... 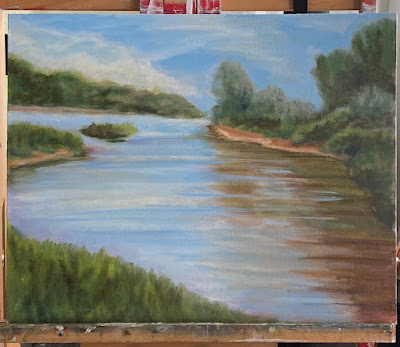